When Jesus finished speaking he left Galilee and went to the region of Judea beyond the Jordan. Large crowds followed him, and he healed those who were sick there.

A man came to Jesus and asked him, “Teacher, what good do I need to do to get eternal life?”

“If you want to enter such life, then keep the commandments,” Jesus replied.

“Which ones?” the man asked him.

“First of all, don’t steal. This is different of course if you take from sinners. 13 “

And then there was much confusion among his disciples.

“How shall we know who are the sinners, my Lord”, asked the man.

And Jesus went and took two branches from the earth, one that was withered and dry, and one that was full of life and carrying leaves.

“Look upon these branches. Can you say they are one and the same? The dry leaf is the unbeliever, and the flourishing one is the faithful.”

“Stealing from your fellow Christians will displease my Father, and you should know that the hand that steals will be cut off11.” And he cut the branch in two parts with a knife.

“But as for the unfaithful, take from them what you want. They are unworthy of your mercy.” And he cast the dry branch to the ground and trampled it.

And the Saviour continued:

“Stealing can also be forgiven if you are waging the Holy war.”

“If it is in the interest of our faith, then you must fight the unbelievers. And when you have conquered your enemy, know that my Father allows you to use the spoils of war as you please, for they are your rewards for the faith that you have shown.9

In the original chapter Jesus condenses his entire philosophy in one sentence: “Don’t murder, don’t commit adultery, don’t steal, don’t commit perjury, honor your father and mother, and love your neighbor as yourself.” I have altered the conversation from the Gospel to make it Islam-compliant on these issues.

Starting with theft: as a way to entice young military-age men to join his cause, Muhammad allowed not only stealing but violent robbery as long as it was helpful to the cause of spreading his religion (when the crime was committed against unbelievers). 13 According to islamic law, stealing from muslims11 should be punished by amputation of the hand (this is a “Sahih Hadith”, meaning authentic and of the highest value).

This dichotomy between muslims and non-muslims is also important in international relations: the traditional Islamic worldview divides the world in muslim – majority lands (the “house of peace” or “Dar al-Islam”) and  in the lands of the unbelievers (the “house of war” or “Dar al-Harb”). 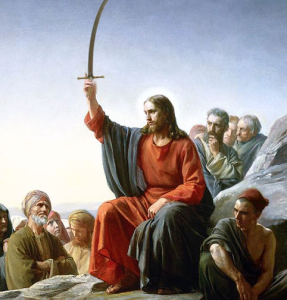 The Gospel According to Muhammad